Yafour: yet another four-in-a-row or connect-4 game

Yes, another implementation of the well-known four-in-a-row game, a.k.a. connect-4. 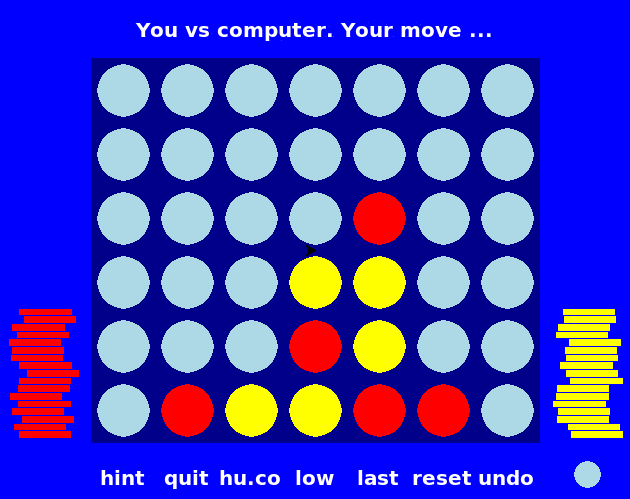 Implementation of this game was an exercise in

The user interface is not documented at all, simply click around, and everything will become clear. I guess.

In Part 6 ("Bitboard"), the author tells which bit magic is used, but does not explain clearly how the magic works. Therefore, I made a page which tries to explain this.

My version of the game is available in the downloads section. It runs in Linux, Windows and macOS.

I could not find how to incorporate a Fortran code, using setup.py and 'setuptools', in the same way as C or C++ code. Therefore, the compilation of the Fortran code (ninarow.f90 (in principle ready to take any size of the board and play any length of a winning line)) is done explicitly, yielding a .so or a .dll file (Unix vs. Windows). The program yafour.py then searches for this file using the content of 'sys.path'. The Fortran program is equipped with a C-like interface in the function cninarow(). This function is called in the Python program using CDLL (Unix) or WinDLL (Windows).

Using f2py works more or less, but I read somewhere that the support will be discontinued soon, so I abandoned this path. Some inactivated f2py code is still present in yafour.py.

If somebody know a better, or even 'the proper way' to do this, let me know.

The graphics look somewhat primitive. This is caused by the fact that at this moment (feb 2022) 'tkinter' does not know about anti-aliasing.

It appears that turtles (the dishes in yafour) are moving slower after some use. I have no idea what causes this. Suggestions are welcome.

Since I simplified the code to erase a text, the performance degradation is not happening anymore. Problem solved but why?

Other implementations of four in a row

Here a not comprehensive list of some implementations of four in a row. I compared the strength by playing against yafour, level medium. If there was a choice in strength, I chose the strongest one for yafour's opponent.

It should be noted, that running the algorithms in javascript results in a poor performance compared with Fortran, so raw speed wins here from good code.